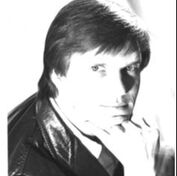 Valery Lantratov has had a distinguished career as a dancer in the companies of Vladimir Vasiliev, Maya Plitsetskaya and Ekaterina Maximova and international tours with Rudolf Nureyev.   Most recently he has made international headlines for his role as Czar Nicholas II in a production of the new ballet Rasputin, with Farouk Ruzimatov of the Marinsky Theater (Kirov) and for successful international tours of Don Quixote and original choreography for the annual festival for the goddess Aphrodite in Cypruss.

A graduate of the Moscow Academic Choreographic College, Lantratov was selected as a first soloist with the Moscow Stanislavski Ballet.    With the theater he danced principal roles in such ballets as Don Quixote, Copellia and Romeo and Juliet.  He has received accolades in the Russian and international press for his strong technique, personality and expressiveness.
In 1993, Lantratov began working for the Kremlin Ballet.  This same year, he formed the Russian National Ballet Foundation.  He has toured as a solo guest artist in such countries as Japan, Germany, Italy, Greece, France, Portugal, Spain and the United States.  The Russian National Ballet Foundation has toured in Europe, Asia, The Middle East and the United States.
In 1997, Russian president Boris Yeltsin named Valery Lantratov “ People’s Artist of Russia,” the Russian Federation’s highest artistic honor.
Mr. Lantratov holds a teaching certificate Russia's renowned National Academy of Theatrical Arts- GITIS.*  For three years, Mr. Lantratov served as a guest instructor at the Boston Ballet.
With his Russian National Ballet Foundation, Lantratov is able to realize his goal of introducing new audiences throughout the world to some of the finest classical works of Russia.  “No matter what might happen between the countries in the world, dance can deliver peace, compassion and art—eternal values.”